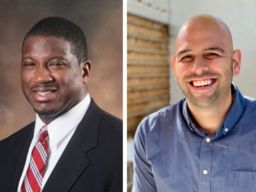 Stephanie Krämer ’08 Loves Living “In the Middle of It”

by Stacy Calfo  |   Back to Table of Contents

After living in 11 different countries as a child, Stephanie Krämer ’08 says it was natural for her to become a globally minded person.

After she settled in Raleigh as a sophomore, Krämer said, it was Ravenscroft that helped fuel that international flame.

“While I loved my writing classes, which is primarily what I do today, and my government and history classes opened the door to politics for me, it was really the overall curriculum at Ravenscroft that put me on my current path,” Krämer said. “The school offered a well-rounded curriculum that prepared me for any career I chose.”

She didn’t stay stateside for long. Krämer went on to study international relations and diplomacy at Schiller International University in Heidelberg, Germany. She then earned a Master of Law in International Law at the University of Edinburgh in Scotland. An internship in the public information department at the United Nations headquarters in Vienna, Austria, led her to develop an interest in the communications side of political and international affairs and her current position as communications and advocacy coordinator for the European Brain Council, a non-governmental organization based in Brussels, Belgium.

The EBC works with the European Union Parliament and the European Union Commission to advocate and lobby for everything related to the brain, representing doctors, patients, scientists and pharmaceutical companies with the overall goal of bringing together key players and raising awareness of brain conditions and the need for research funding.

That advocacy is important. While the EU spends over $800 billion to treat brain conditions, from Alzheimer’s disease and multiple sclerosis to depression and traumatic brain injuries, the issue receives far less attention than conditions such as cancer.

Krämer is working to change that, focusing her efforts on public engagement and external communications through social media, the EBC website, publications and project assistance. She also coordinates the council’s major events.

“In November, for example, we hosted almost 200 people for an awareness event,” she said. “The event helped people learn how treatments are developed and the science, research and innovation that goes into treating brain conditions.”

While she loves the work, she also loves living in Europe, especially the last three years in Brussels, which she describes as a melting pot of international professionals with a strong expat community. She also enjoys the ease of traveling to many other countries.

In considering advice for current Ravenscroft students, Krämer encouraged students to study and live overseas and emphasized the support many European universities offer with cultural adjustment and study abroad.

“Our world is global,” she said. “What better way to experience it than to live in the middle of it!”

Krämer (second from right) participates in a panel at the European Health Parliament in Brussels.

Krämer proudly displays her diploma after receiving a Master of Law from University of Edinburgh in 2014.

Students interested in studying, working and living abroad can get a leg up with the International Diploma, a Ravenscroft program that helps students develop the knowledge, skills and perspectives to thrive in global environments like the one Stephanie Krämer ’08 describes. Through a combination of curricular, extracurricular and travel/hosting experiences, students explore global issues, world languages and cultures, exchange programs and more. Learn more on our website.

Tate Replogle ’14 said of her experience with the International Diploma program, “This program set the foundation for me and ignited my passions of service and travel. What I learned and gained through this program carried me through college, including studying abroad in India, Greece and England. I am now a Peace Corps trainee in Albania, and I am excited to live and serve in Albania for the next two years.”

Today, more Ravens than ever are matriculating at colleges and universities overseas, including Allison Arber ’17 (University of Oxford, England), Lily Wayne ’17 (Trinity College, Ireland) and Austin Morin ’15  (University of St Andrew’s, Scotland). Gap-year experiences, available through organizations such as Global Citizen Year and English-Speaking Union, are growing in popularity as well, providing recent high school graduates with cultural immersion and service opportunities around the world before they begin their undergraduate studies.

David Kates, Ravenscroft’s director of global education and initiatives, said, “Studying in another country and participating in gap-year experiences provide students with time for self-discovery and to become proficient in other languages. They enable students to immerse themselves in another culture and shape their global perspectives.”

Read about other Ravens’ global connections in these stories from the archives of Ravenscroft Magazine:

I am in my last year studying biology at the University of St Andrews, hammering away at my dissertation titled “Climate Change and Blue Tit Nest Building Behaviour.” I have visited friends I have made here in beautiful countries like Zimbabwe, Tanzania, England, Hungary, Switzerland, Germany, Poland, France and Spain.

I am absolutely loving everything about my experience at Trinity College, especially living in Dublin. I enjoy having friends from all over the world, and I have gotten very involved on campus with some of the societies. In April, I was elected president of TEDx Trinity College Dublin.

After graduating from Ravenscroft, I matriculated at Elon to pursue a degree in Religion and Asian Studies. I was blessed with great mentorship from faculty, engaged service learning experiences, and study abroad experiences in India, Greece and England. After graduation I enrolled in the Peace Corps. I’m grateful to Ravenscroft for the chance to lead, learn and serve.

My experiences with the Ravenscroft International Diploma helped me become a stronger, more confident leader. The topics covered in Jessica Yonzon’s Global Issues courses expanded my understanding of some of the most pressing challenges to the world in the 21st century. Through my pursuit of the Ravenscroft International Diploma, I became more involved in extracurricular activities, serving my community, more knowledgeable about global challenges and ultimately more dedicated to everything that I am a part of.

I love learning about culture and have always been interested in international relations. The International Diploma equipped me with a well-rounded international education. The coursework, coupled with travel and hosting opportunities, shaped me into a more competent and growth-minded global citizen. I graduated from UNC-Chapel Hill last spring and I am currently working as an English teacher in Spain.

The chemistry course at Oxford is amazing, and I am having a great experience working with world-leading professors and researchers. I also enjoy experiencing the culture of England and the traditions of an ancient university. In addition to visiting several countries in Europe during breaks, I took a German class in Munich which allowed me to immerse myself in Bavarian culture for several weeks.