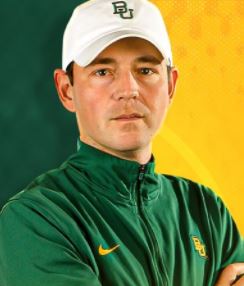 Ravenscroft alumnus Michael Woodson '07 has been named head coach of Baylor University's men's tennis team. He had served as interim head coach in the 2020-21 season and previously as the team's associate head coach.

"My family and I are very excited to be staying in Waco long-term. Baylor University is an incredible private, Christian institution with premier athletic programs across the board," he said. "I'm thankful for the administration's belief in me to lead this team and am looking forward to continuing building on their great tradition of excellence."

According to the university's news release, Woodson took over as interim head coach in July 2020 and guided the team to a 29-4 overall record in his fifth season with the program. The Bears won a share of the Big 12 regular-season title after going 4-1 in conference play, then captured the league's postseason championship with wins over No. 7 TCU and No. 2 Texas. Following the Big 12 titles, Baylor earned its first No. 1 national ranking since the end of the 2005 season.

Woodson also guided the Bears to the 2021 ITA National Team Indoor Championship finals for the first time since 2005. They ultimately fell to then-No. 2 North Carolina.

Woodson played tennis for three seasons at Valparaiso University before graduating in May 2012 with a triple major in biology, chemistry and exercise science. He then earned a master's degree in sport administration in December 2013 and served on their coaching staff for several seasons before joining Baylor.

In addition to the outstanding season of competition on the court, Woodson has also carried on Baylor's tradition of excellence in the classroom, seeing players bring home 17 ITA Scholar-Athlete honors and three ITA Scholar-Athlete team awards during his tenure there.

"My motivation to impact young lives stems from one of Ravenscroft's best teachers, my mom [late Lower School teacher Maria Woodson]," he said. "She was always so positive and encouraging with her students and her son that learning and growing was fun. Combining that joy for development with the educational fundamentals that Ravenscroft provided me, I am more than prepared for this next step in my coaching career and look forward to what's to come, both on the court with my student-athletes and off the court with my beautiful wife, Vanessa, and our daughters, Jordyn and Kiley."

"I was delighted to hear that one of our alumni was recently named head tennis coach at Baylor University," Athletic Director Ned Gonet said. "Michael was a solid student-athlete in his time here at Ravenscroft, contributing and excelling both in the classroom and on the court. I know he will do a great job leading the program in Waco for the Bears of Baylor University."

Below, Woodson with his players and celebrating their conference championship. 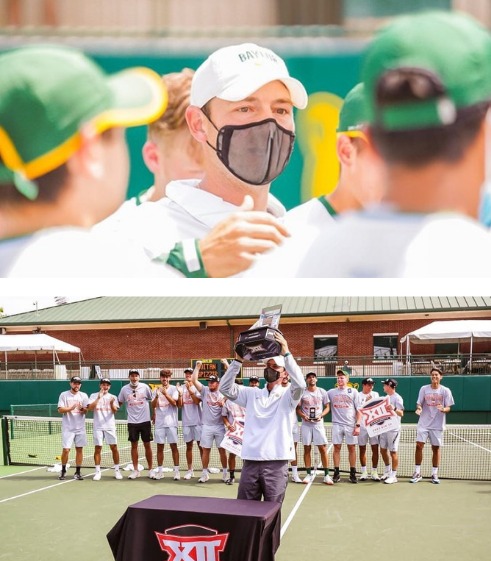