Davis Macnabb '19 and Joel Brown '23 won individual championships, and Brown was voted by the coaches as the Most Outstanding Wrestler. Brown and Macnabb also qualified for National Prep Championships, which were held at Lehigh University in Bethlehem, Pennsylvania, Feb. 22-23. 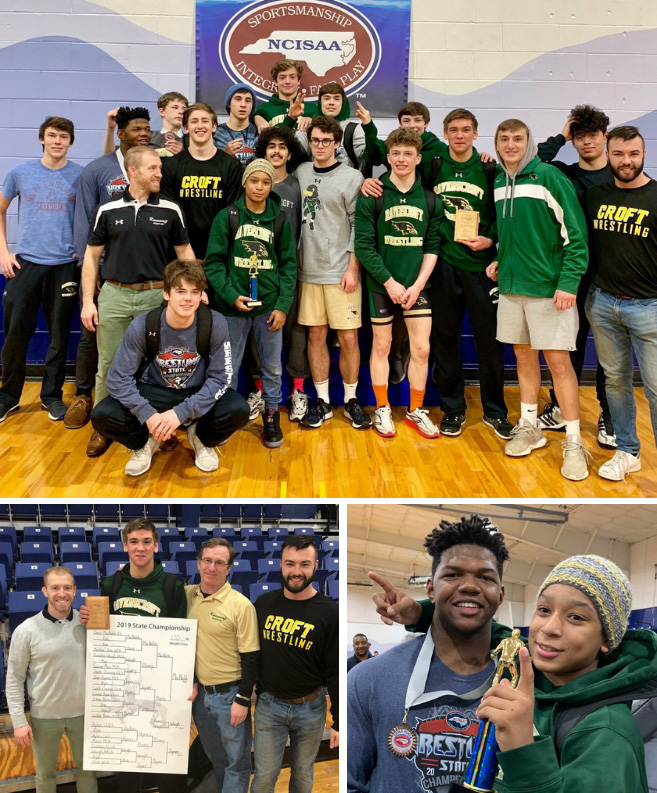 Coach Garrett Cummings said of Davis Macnabb '19's championship, "I am so proud of Davis' growth as an athlete and young man and could not have picked a more deserving champion. He followed the game plan perfectly in his finals match, forcing his opponent into desperate attacks when he was tired, and Davis promptly capitalized and was able to put the match out of reach in the third period. It was great for our underclassmen to watch Davis' performance at states, as it was a perfect example of how an experienced wrestler works in a high-pressure tournament situation. "

Of Joel Brown '23's performance, he said, "Joel has simply had an incredible season that won't soon be replicated, and certainly not by a middle-schooler. As an eighth-grader, he went undefeated in all of his matches in North Carolina, beat the returning NCISAA state champion, beat 4A and 3A state qualifiers, and won the MOW at half the tournaments we entered. The only previous Ravenscroft wrestler to match that level of local dominance was Calvin Atkeson '18, as a senior. Joel's experiences and year-round commitment to excellence in the sport will continue to earn him accolades that will get the attention of coaches at the next level in the coming years."

Pictured above, clockwise from top: The varsity wrestlers and coaches at the state championships; Dominic Young-Smith '20 and Joel Brown '23; Davis Macnabb '19 with coaches.