On Saturday, Jan. 26, three teams of Upper School students with a passion for robotics traveled to Farmville to compete in a FIRST Tech Challenge regional robotics tournament. The 14 students represented the Robotics Club and the top two teams from the Ravenscroft tournament held on Jan. 3. 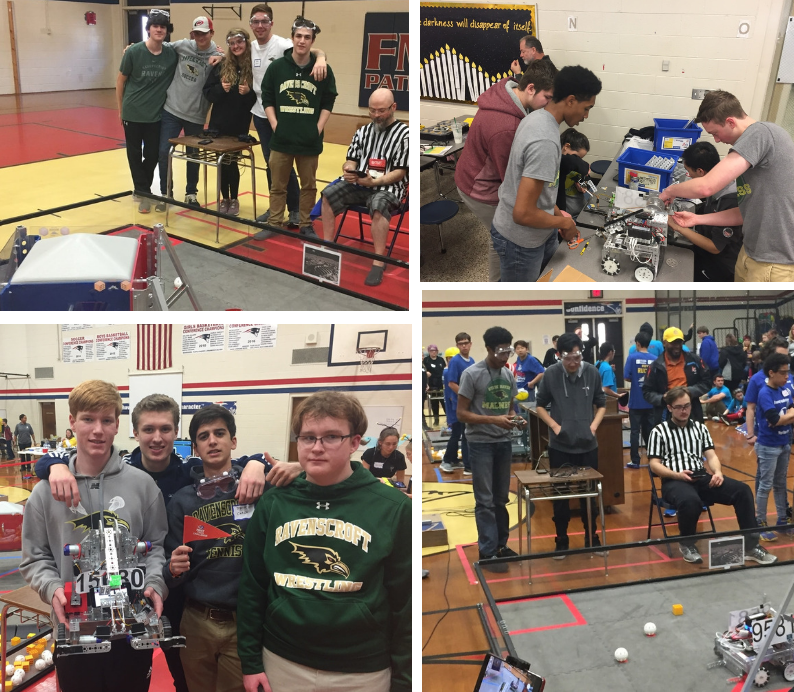 "This was the first competition I had been to," Alex McNeill '20, of the RoboRavens1 team, said. "My favorite part was getting to meet other people and see a wide variety of robots."

"This competition was a very eye-opening experience to me, especially as a girl doing robotics, seeing all of the boys there, with women in the minority," said Martina Frederick '20, a member of the RoboRavens 2 team. "What was super-cool was that most of the teams that were higher up in the rankings had more female representation."

Competing in a field of approximately 20 teams, both Ravenscroft class teams made it to the semifinals of the tournament. Teammates worked together to fine-tune their robots and address any unexpected problems as they prepared for the different components of the challenge.

"At the beginning of the day before the competition started, we tried to do a pull-up with our robot and it would not work. It kept falling off the hook onto the ground," Alex said. "This was weird because I had tested it the Friday before and it worked perfectly. I believe the issue was that since we were using a fully charged battery, it had too much power. So our programmer [Edward Purrington '20] was able to quickly reprogram the robot so it wouldn't pull up too fast. We also put duct tape on our hook to give it more grip.

"Another issue we faced was the arm seemed to not be lifting up and down as steady as usual," he added. "I was able to see that one of the gears was worn down and quickly switched it out for a new one, which helped a lot."

The club team also experienced what advisor Nelson Nunalee called "some serious adversity" on the morning of the tournament that left them with a robot that wasn't functioning.

"Rather than give up, however, they showed true resilience, nursing their robot back into the competition by mid-afternoon," Nunalee, also one of the Robotics teachers, said. "It was inspiring to see all of these young people demonstrate collaborative problem solving under pressure and excel doing it. In addition, they represented Ravenscroft well in their interactions with other students and adults."

"The whole experience was amazing, and I would definitely do it again," Martina added.

Congratulations to these robotics students for a job well done!