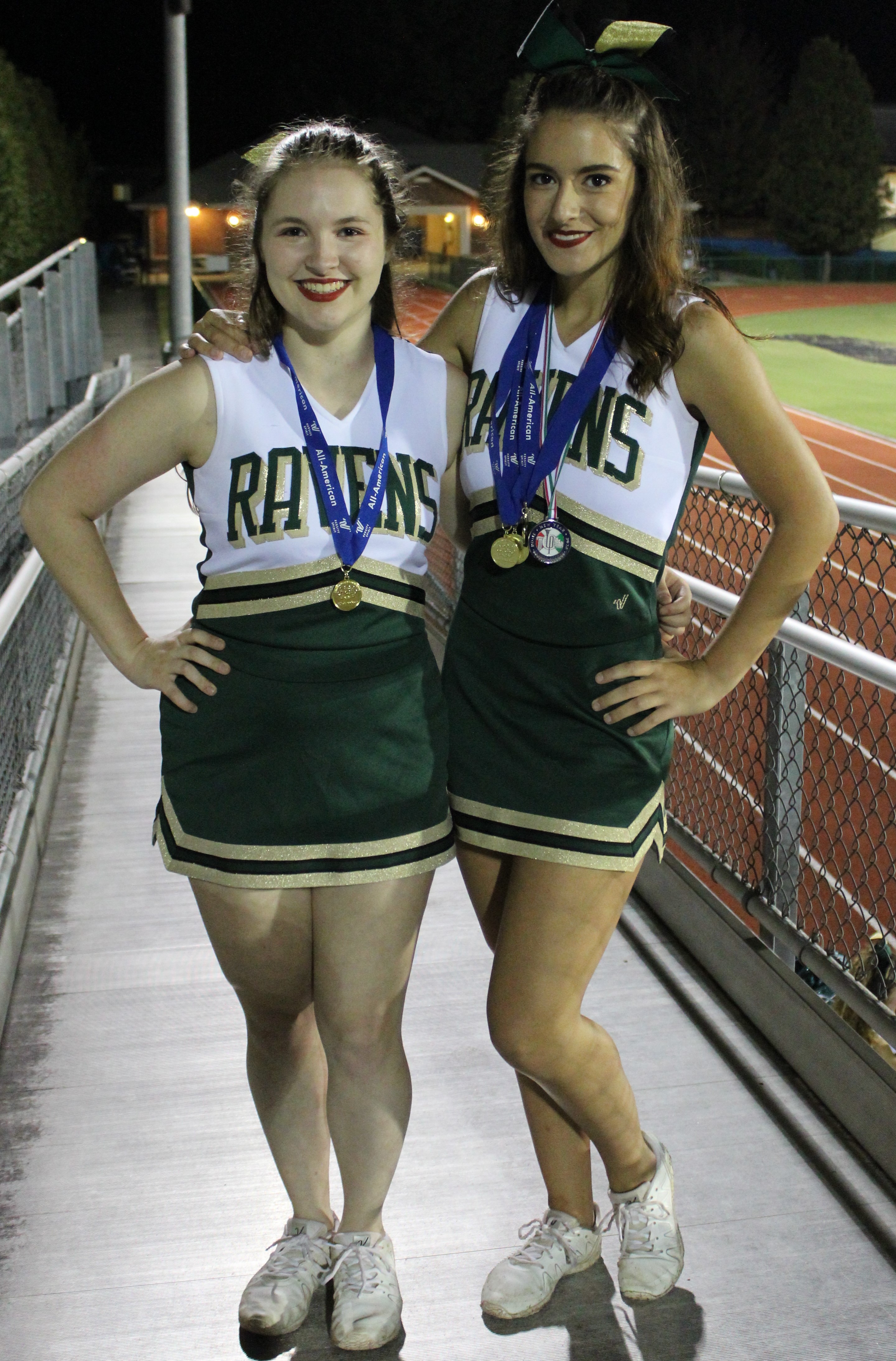 Ravenscroft varsity cheerleaders Bailey Foster '21 and Hadley Crookenden '21 have been named Universal Cheerleaders Association All-American. All-Americans are selected from among eligible UCA camp participants based on a demonstration of cheerleading or dance skills, shared this year via video. The announcement of this year's selectees was made in September.

Cheerleaders at Ravenscroft enjoy the distinction of being two-season athletes — fall and winter — if they choose to try out for both. Alongside this substantial commitment, they train, often year-round, for the strenuous stunts, tumbling and dancing involved in their routines.

The All-American program is celebrating more than 30 years of recognizing standouts in cheerleading. According to UCA, only the top 12% of cheerleaders and dancers who try out earn this designation and the opportunity to join their peers from across the country in participating in rehearsals and performances. This year, the All-Americans are slated to perform at the Universal Orlando Resort in November.

Hadley, a senior, started cheering at Ravenscroft in eighth grade and has been a two-season athlete ever since. As a freshman she was named the varsity squad's Most Outstanding athlete for the winter season. She served as a counselor at Ravenscroft's summer Cheer Camps for two years and was nominated to participate in the school's Student Athlete Leadership Training (S.A.L.T.) program. She has twice been voted co-captain of the Ravenscroft squad. In addition to her involvement at Ravenscroft, Hadley is active at two outside gyms. She has been named All-American twice before and has traveled to London and Rome for performances with those squads.

"This year marks my third year making the All-American team, and the excitement surrounding that recognition never gets old. However, because this is my senior year, it was especially gratifying to be a part of such a selective group," Hadley said. "I have been cheering for a while now, and receiving this honor during my final year at Ravenscroft has really brought me full circle. It is amazing to look back at all the hard work that enabled me to even be nominated for the team — not to mention, make it — and know that I would do it again in a heartbeat."

Bailey, also a senior, started cheering at Ravenscroft in the winter season of her seventh-grade year. As a two-season athlete, she has already earned six varsity letters in cheer and served as team co-captain with Hadley last year. She received the Most Outstanding award for the winter season in 2019. Bailey has served as a counselor for the school's Cheer Camps and has been nominated to participate in S.A.L.T. this year. She takes weekly tumbling lessons outside of school to further advance her skill set.

"Cheerleading requires dedication and strength, which I show through my position as a main base. This often means that I am lifting another girl above my head multiple times every day. I really love this position because you have to be physically capable of doing that. We all have to trust each other for difficult stunts, which creates a bond that will last for a lifetime," Bailey said. "When I became a co-captain last year, the responsibility taught me how to be a better leader. All of this has pushed me to strive harder at promoting and educating people on what cheerleading truly is."

Congratulations to Bailey and Hadley!

Above, Bailey and Hadley wear their All-American medals at a recent game.