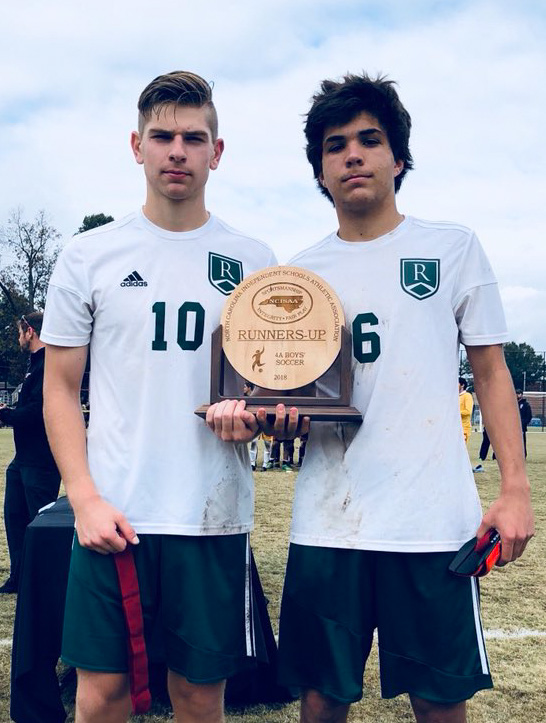 The Ravenscroft Varsity Boys Soccer team traveled to Wesleyan Christian of High Point for the North Carolina Independent Schools Athletic Association State Finals on Saturday, Oct. 27, ultimately falling 2-1 in a hard-fought contest.Wesleyan scored first at the five-minute mark to take a 1-0 lead. The Ravens' lone goal came from Emmanuel Petrov '19 to tie the game at 1-1 at the 32-minute mark of the first half. Both teams exchanged opportunities over the next 55 minutes until Wesleyan scored with 4:19 remaining in the game.Highlights of the varsity season, which finished with an overall record of 18-2, included their championship in the Ravenscroft Invitational (their third title since 2013 and 14th win since the tournament's inception in 1973) and the 2018 TISAC Championship. This is the first time the Ravens had reached the state finals since 2002. Previous state championship seasons were 1977, 1978, 1982, 1983 and 1986.

The Ravens were represented on the NCISAA 4A All-State team by Emmanuel Petrov '19 and Jared Sullivan '21.Coach Alix Charles said of the team's performance against Wesleyan Christian, "This is what a final game should be like: two great teams performing at their best, testing each other in every sense of the word. While I want to congratulate the Wesleyan team for winning it, congratulations to our boys for another outstanding performance. The boys worked hard and fought until the final whistle.

"It's unfortunate that someone had to lose, for this is a game that could have gone either way," he added. "It just was not our turn yet. We thank the players for a great season!"

Congratulations on a great season to Coach Charles and the varsity boys soccer team!