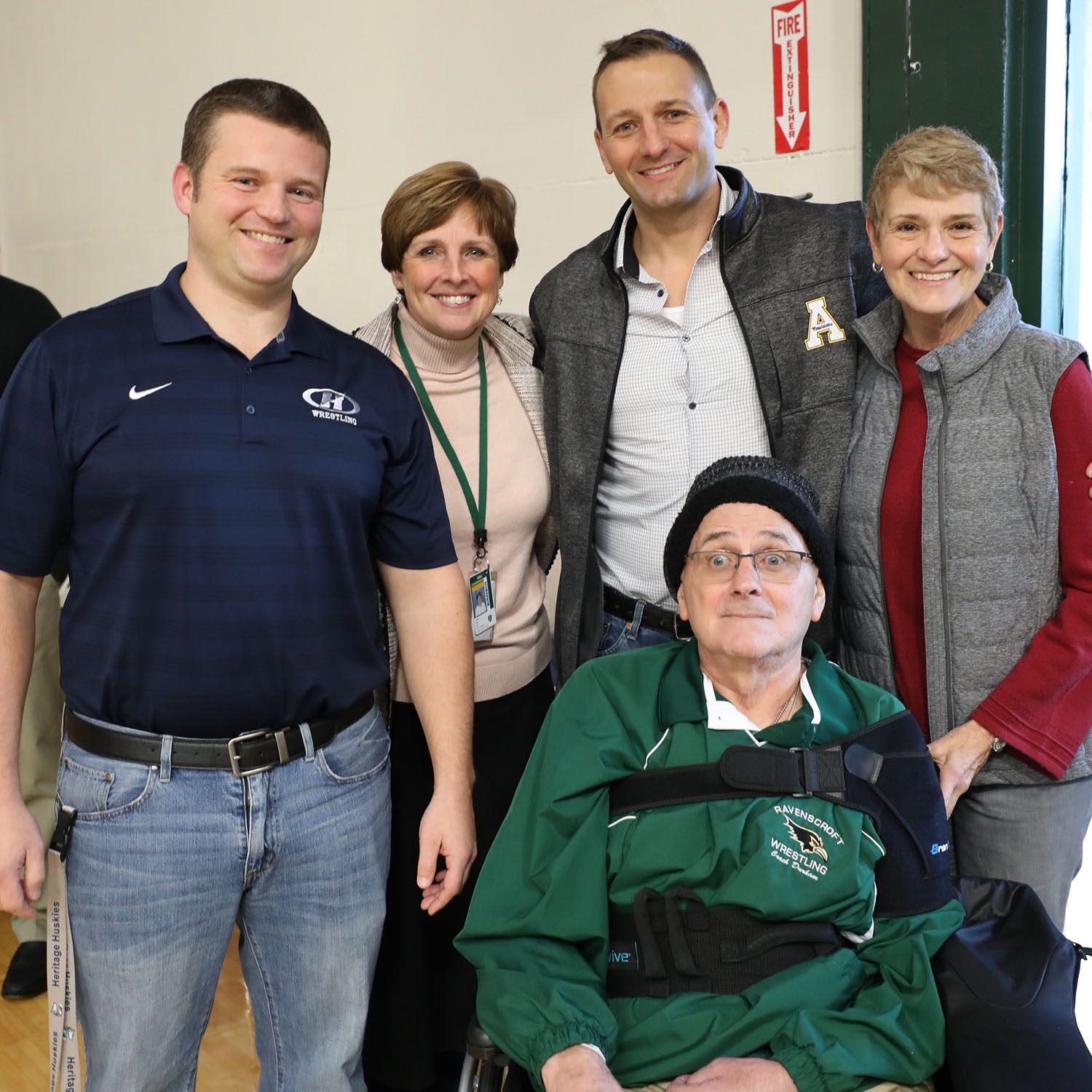 Head of School Doreen Kelly announced that a major renovation will soon take place in the north end of Richards Hall to create a new wrestling practice center. The new wrestling center will include a weight room dedicated in honor of Ed Durham, longtime Ravenscroft math teacher and wrestling coach, who retired in 2018.

"The new wrestling center will house state-of-the-art practice facilities," Kelly said. "It is my honor and great privilege to announce that a group of donors has come together to name the weight room in the new facility in honor of Lt. Col. Ed Durham."

Kelly made the announcement Tuesday, Jan. 7, in Cox Court as Ravenscroft's wrestling team prepared to take on Heritage High School, whose coach, Thomas Durham '97, is one of Durham's sons. Current and former students and wrestlers, their families, faculty and staff, trustees and friends joined Kelly and Durham's family (pictured at right) in a roaring standing ovation in celebration of this recognition of Durham's years of commitment and service to the school.

Following a 20-year career in the Army, Durham came to Ravenscroft in 1997, teaching math and coaching football, baseball and wrestling. As head Middle School wrestling coach, he coached two undefeated seasons, won a MAC-10 Conference Championship and developed four future state champions. He also served as an assistant varsity wrestling coach, with six recent TISAC conference championships and one NCISAA runner-up during his tenure. He was also a parent volunteer, helping to score matches and watch his sons, Ed '94 and Thomas '97, compete.

"A constant advocate of the program and our athletes, Ed played a major role in the creation of the current varsity wrestling facility and the 2010 refurbishment of the wrestling facilities in the A.E. Finley Activity Center. His dedication made an impact!" Kelly said.

"I am so grateful to be in this space as we come together to honor our beloved colleague and friend," she added.

The project will begin this spring.

Above, Head of School Doreen Kelly with (from left) Thomas '97, Ed '94, Ed and Mary Ellen Durham; below, Ed Durham with current and former Ravenscroft wrestlers; at bottom, the crowd in Cox Court giving a standing ovation to Durham. 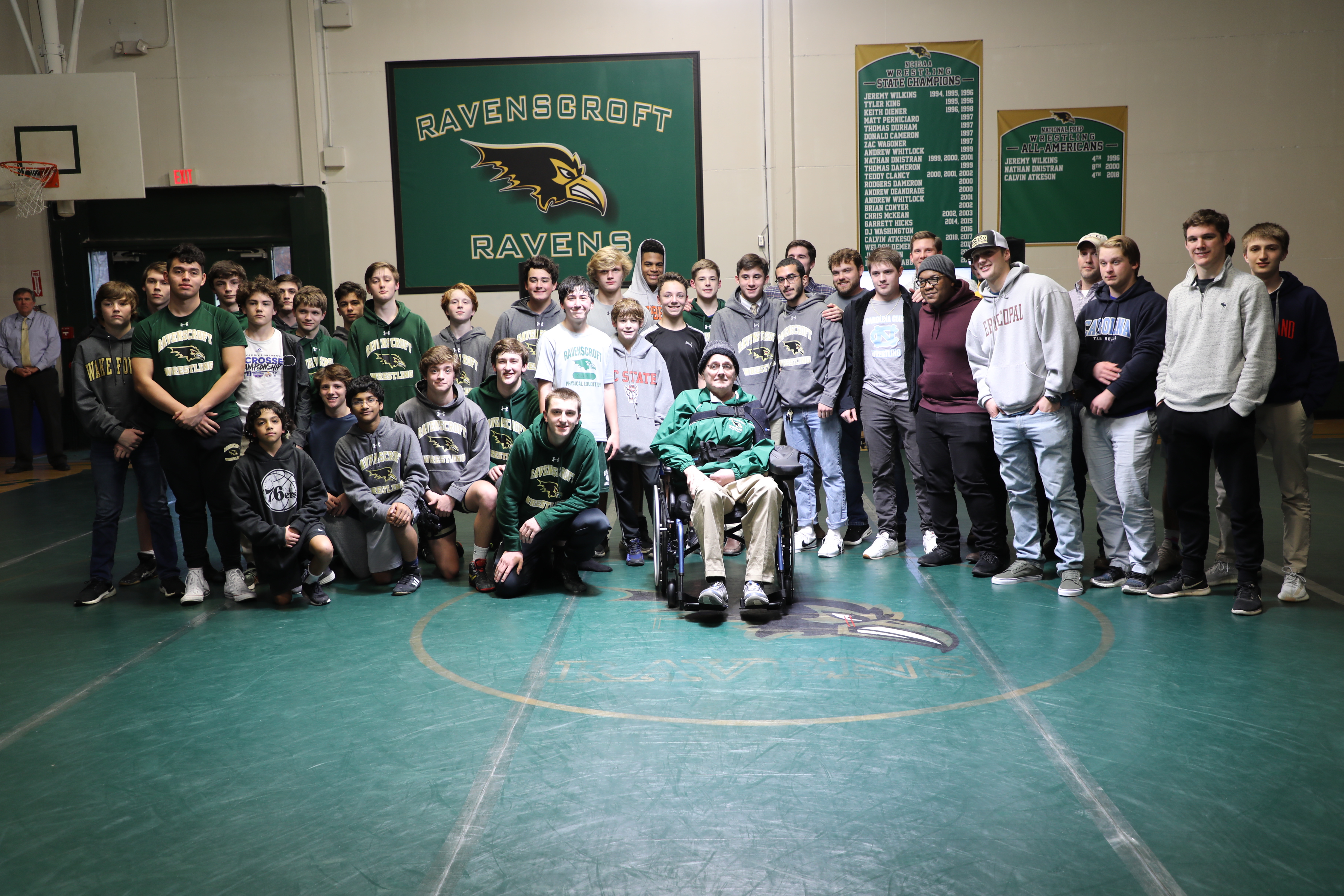 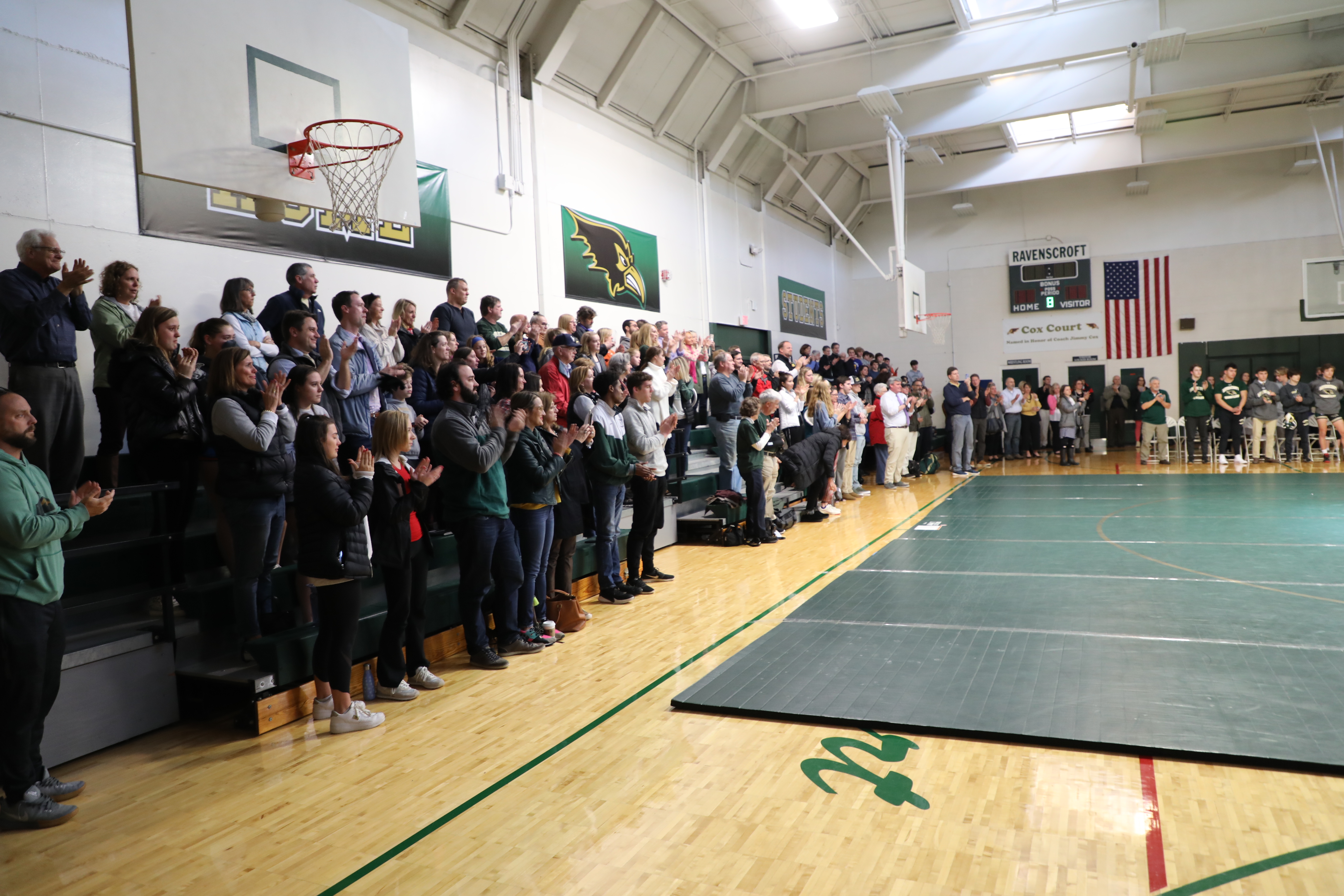