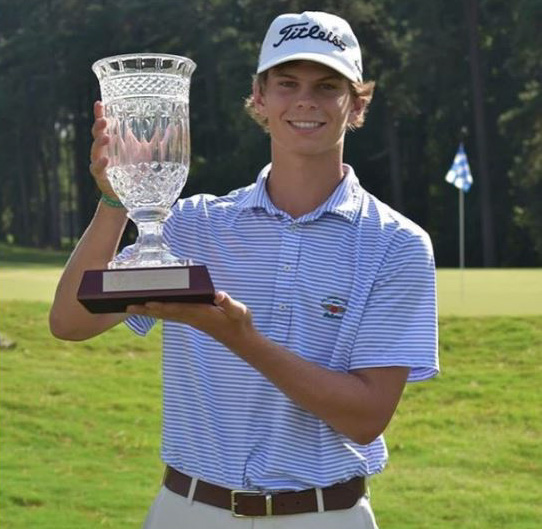 Ravenscroft golfer Kenan Poole '19 has been selected by the Tarheel Youth Golf Association to the 2018 N.C. All-State Golf Team.

Kenan is a two-time captain and a five-time TISAC All-Conference performer at Ravenscroft. He was an All-State honoree as well in 2017, when the Ravens last won the NCISAA State Championship. Kenan had a very successful summer in 2018, winning both the Jimmy Anderson Boys' Invitational 69-72 (-3) and the CGA Dogwood State Junior Boys' Championship 71-68-69 (-8). He also represented the state of North Carolina in the Carolinas-Virginia Boys' Team Matches, which the Carolinas team won. In addition, he was a United States Junior Amateur Match Play participant.

The Tarheel Youth Golf Association and the Carolinas Golf Association selected 30 girls and 30 boys for the 2018 teams, honoring those junior golfers who have had the most success in amateur and junior golf events at the local, state, regional and national levels over the past 12 months. To be eligible, each junior must have played in a minimum of five TYGA N.C. rankings events in 2018. The awards were determined by a combination of each player's scoring differential and the total points earned in the rankings events. These outstanding juniors will be honored at the N.C. Junior Golf Night Awards Banquet on Saturday, Jan. 26, at Mid Pines Inn and Golf Club in Southern Pines.

Kenan is currently ranked first for the 2019 class by Golfweek and second by the Tarheel Youth Golf Association and has signed with the University of North Carolina at Chapel Hill, joining former teammate Ryan Gerard '17 and adding to the long history of Ravenscroft golfers in the ACC.

In addition to his impressive athletic record, Kenan is a National Honor Society member, is regularly named to the Head of School Honor Roll and was recently named to the 2018 AJGA Transamerica Scholastic Honor Roll. He is a two-year member of the Ravenscroft Student-Athlete Leadership Group and has also been active in the community, working with the Carolina Cup (charity golf tournament run through the AJGA, consisting of 28 NC junior golfers) since 2014-15. He has helped raise over $5,300 for charitable causes.