Celebrating the Class of 2025 as they head to Middle School next fall, Payton Hobbs, head of the Lower School, shared the many successes and accomplishments of this fifth-grade class — including organizing the "Hats for Houston" fundraiser to support hurricane relief in Texas; spearheading the "Secret Agents of Kindness" movement to spread joy throughout our entire community; packing 10,000 meals for Stop Hunger Now; collectively reading over 1,800 books and much more. 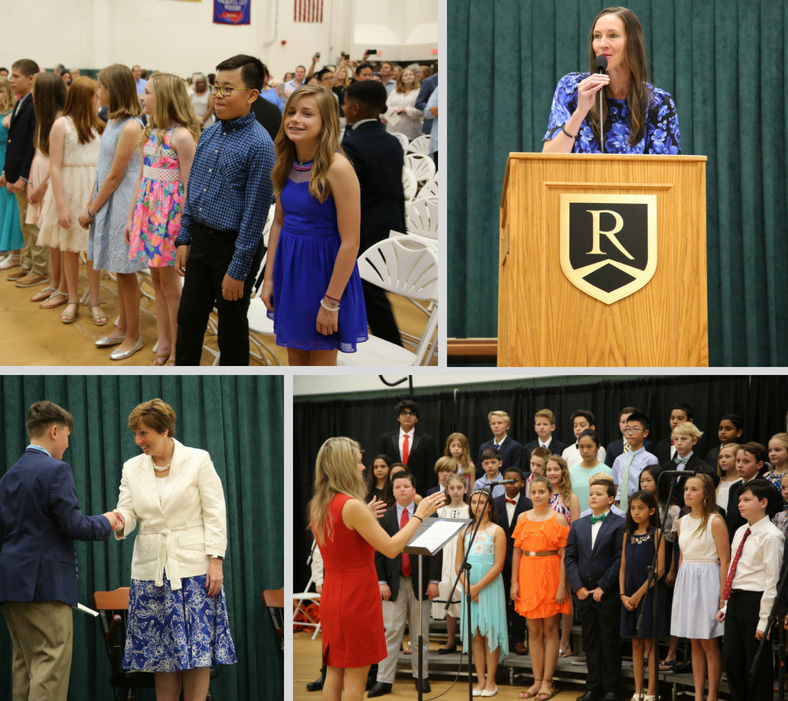 "Pretty impressive considering those are just the highlights. Imagine how [these fifth graders] will change the world in the years ahead," Hobbs said.

Elijah Smith '25 and Gaddyn Cole '25 led the audience in the National Anthem, and Matthew Bright '25 opened the ceremony with an invocation expressing well-wishes, courage and strength as our fifth-graders move on to middle school.

Beautiful voices filled the air as the Lower School Choir sang "For Just a Little While" by Sally Albrecht and Jay Althouse.

Hobbs read one of her favorite books, "What Do You Do With A Chance" by Kobi Yamada with the motivational message that "a chance, once taken, might be the one to change everything" and commended our fifth grade students for being brave and taking healthy risks on their journeys.

Olivia shared a special moment, before she started at Ravenscroft in kindergarten, where during an orientation students performed "Follow the Yellow Brick Road." It was at that moment she knew she wanted to be a performer, too. She said, "If there is something that you love, you should go after it."

With delight and humor, Logan retold the story of his day serving as assistant head of the Lower School in first grade. Explaining that he had "rocked it" but then tripped while leaving the stage during his daily responsibilities, Logan said in that moment he knew he had two options: succumb to embarrassment or draw from the skills he had been learning. He jumped up, brushed himself off and, using resiliency, gave a big thumbs-up to the audience signaling that he was "all good."

Hannah shared her first grade fear of riding the ferris wheel at Fall Roundup. She said the lesson she learned was that "facing your fears is a good thing. When an experience seems scary at first, it is worth it in the end."

Surya shared the lessons he learned from performing as a reporter during the fourth grade Wright Brothers musical. Explaining he was incredibly nervous, he said he overcame his fear and did not forget a single line. "I learned that practice makes perfect, help other people because it makes their day, and to face fears because something good will come from it," he said.

Marni, who has recently moved to Raleigh from California, explained how hard it was for her to start fifth grade in a new place without knowing anyone. When she walked into the fifth-grade center, she said, she shifted her mindset and realized that even during the "hardest and roughest times, I will make it through."

Emma noted that she recently shadowed a Middle School student to learn more about the new place "at the top of the steps." Intimidated, she took each step, one by one. As she climbed closer, she embraced her fear. She reminded her classmates that it is always good to ask an adult for help because they provide encouragement and support, "and when you feel a rush of encouragement, life is saying to you, 'It's gonna be ok.'"

A highlight of the ceremony was the reflection "Looking Back," a special iMovie created and shared by the entire fifth grade.

Lower School faculty were recognized during the ceremony for their milestone years of service and award winners who were celebrated previously during the end of year Faculty and Staff Recognition and Reception were honored again.

Each fifth-grader received a certificate from Hobbs and were congratulated by Head of School Doreen Kelly and by Denise Colpitts, head of the Middle School. The choral benediction, "Go With A Song in Your Heart" by Jay Althouse, was performed by the Lower School Raving Ravens, directed by Katie O'Neill with accompaniment by S.K. Chipley.

Photos above, clockwise from top left: Fifth-graders wait to take their seats after the processional; Payton Hobbs praises the spirit of the Class of 2025; Lower School Raving Ravens perform; Doreen Kelly congratulates students.