Fourteen Ravenscroft seniors have committed to collegiate athletics next year. These outstanding student-athletes will carry their Ravens spirit, grit and leadership to schools including Washington and Lee, the University of Memphis and North Carolina A&T — with three students headed to United States service academies.

"I'd like to congratulate all of our athletes who will be taking their talent to compete next year at the college level," Athletic Director Ned Gonet said in a video shared through Ravenscroft Athletics' social media. "We truly appreciate all of your dedication, your commitment, and your achievement over the years."

Congratulations to these students for these well-earned opportunities! Read on to learn about their athletic careers at Ravenscroft.

Kirstin Debrah '20 was a standout performer in cheerleading and track & field during her time at Ravenscroft. She was a three-time letter winner in track and in 2018 and 2019 was an All-Conference pick and MVP for Coach Mike McConeghey. She was recognized by Coach Emily Porter as the Most Outstanding Cheerleader in the fall season of 2018. Kirstin will continue her cheerleading career at The University of Pittsburgh.

Myles Evans '20 was a four-year letter winner in basketball for Coach Kevin Billerman. After earning the team's Most Improved Player as a freshman, he went on to be voted a team captain for 2019-20. Myles will continue his hoops career at The United States Naval Academy.

Zion Evans '20 was a six-time letter winner over three sports. In football, he was a captain, two-way starter, All-Big East Conference performer, and Coaches Award winner for Coach Ned Gonet. A four-year member of the basketball program, Zion, a team captain, earned the Most Improved Player in his junior season. He also ran track and field for Coach Mike McConeghy. He will continue his football career for the Pirates of East Carolina University.

Charlie Everhard '20 was a three-year starter for varsity football and varsity baseball. On the football team, Charlie was a captain and two-way starter. He earned second team All-Big East Conference honors at defensive end. He was selected by his teammates as the 2019 Most Improved Player. On the baseball diamond for Coach Jim Gibbons, Charlie, a catcher, caught every inning of every game for the last three seasons. He had a career .333 batting average. In 2019, he led the Ravens at the plate, batting .400 with 10 doubles, one home run and 20 runs batted in. In November 2019, Charlie was selected by the Raleigh Sports Club as their Student-Athlete of the Week. He will continue his career in both sports at Washington and Lee University.

Macy Frederiksen '20 was a four-year letter winner on the varsity girls basketball team. Macey earned All-TISAC honors in 2018-19 and 2019-20 and was a two-time Granville Central Holiday Tournament All-Tourney selection and Tournament MVP in 2018. She leaves Ravenscroft as the school's All-Time Leader in blocked shots, with 162. She will be competing for the Pacers of William Peace University next winter.

Payne Gridley '20 was a three-time letter winner in soccer and highly decorated during his career. He was named to multiple post-season teams as an NCISAA All-State (2019), All-Region (2019) and All-TISAC (2018 and 2019) selection during his career. Gridley was also chosen as the 2019 Coaches Award winner by Coach Alix Charles and his staff. In the spring of 2019, Payne also earned a letter in golf and was voted the team's Most Improved Player. He will continue his career on the pitch at Sewanee, The University of the South.

Josh Hall '20 was a 2020 All-TISAC performer for Coach Billerman. He will continue his basketball career at The United States Naval Academy.

Thomas Hudson '20 was a five-year member of the baseball program and a two-time letter winner for Coach Gibbons. He will be pitching next spring for Worchester Polytechnic Institute in Massachusetts. 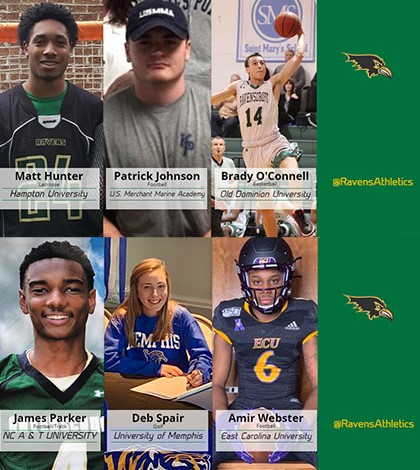 Matthew Hunter '20 was a three-time letter winner and 2020 captain in lacrosse for Coach Sandy Kapatos. He was voted the 2019 Most Improved Player by his teammates. Matthew will be playing for the Pirates of Hampton University.

Patrick Johnson '20 was a two-sport captain in football and lacrosse. As a running back and linebacker in football, he was a three-time letter winner and two-time All-Big East performer. In 2019 he was voted by his teammates as the Team MVP. Patrick also earned three letters in lacrosse, with his talents as a face-off specialist for Coach Kapatos. He will play football at The United States Merchant Marine Academy.

Brady O'Connell '20 was a two-year letter-winner in basketball and 2020 captain. He was named to the 2020 4A NCISAA All-State and was a two-time TISAC All-Conference player. He was voted as the Team MVP by his teammates this season. Brady signed his National Letter of Intent back in November to play basketball with Old Dominion University.

James Parker '20 was a three-sport athlete, who earned eight varsity letters for the Ravens in football, basketball, and track & field. He was a three-year starter at defensive back and 2019 All-Big East selection for Coach Ned Gonet on the gridiron. He will continue his athletic career in both football and track & field for the Aggies of North Carolina A&T University.

Deb Spair '20 was a three-time letter winner and All-TISAC selection in the golf program. Deb was selected as the team's Most Improved Player following her sophomore season. Deb has also competed in many Carolina Golf Association Tournaments in the summers and is currently the fourth-ranked Girls Junior Golfer in North Carolina for the Class of 2020. She will continue playing on the links for the University of Memphis Tigers.

Amir Webster '20 was a two-sport performer and two-year letter winner in football and track. He was a two-way starter and return specialist for Coach Gonet, earning first-team NCISAA All-State and All-Big East Honors in 2019. Amir will play football for the Pirates of East Carolina University.