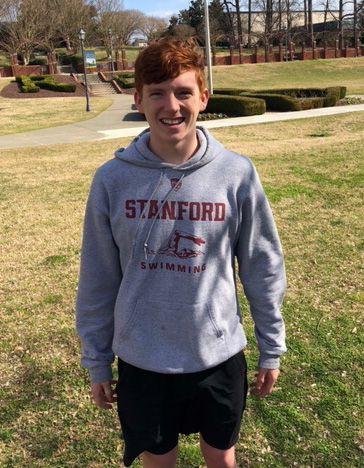 "Matt McGinnis '04 set the bar extremely high for our boys swim team. Over my years at Ravenscroft, we've only had one swimmer break one of Matt's individual records, and now Bode becomes the second," head coach Greg Warren said of Bode's performance. "Since Bode joined our team as a seventh-grader, he's had the goal of getting his name on our record board. I believe he has the talent and, more importantly, the work ethic to set more records over the next two seasons."

"We had some outstanding performances at our conference championship, with 57 overall best times of the season," he added. "We focus on preparing to swim our best at the championship meets, and I believe we accomplished that! I was really proud of how our teams competed, and it was great to see several of our swimmers earn their state-meet qualifying time standards."

Congratulations to these top finishers from the boys team:

The Ravens' next swim meet will be the NCISAA State Championships on Monday, Feb. 11, in the Greensboro Aquatic Center, with 4A prelims starting at 7:45 a.m. and finals at 3:45 p.m. Best of luck to our Ravens swimmers!