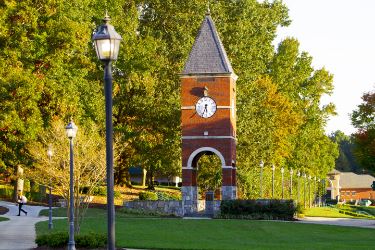 Ravenscroft's history began in 1862 when the will of Dr. Josiah Ogden Watson, a physician and prominent North Carolina statesman, was entered into the court records of Wake County. Dr. Watson was deeply committed to the education of Raleigh's youth and his dream was to "fund and employ a teacher of a Parish school for Christ Church Raleigh." It was in 1868 that the parish school envisioned by Dr. Watson opened its doors with 70 students. From that year until 1937, the parish school was open for periods of time at Christ Church and at St. Saviour's Church.

In September 1937, it was decided by the vestry of Christ Church to reestablish the parish school, and a new name was chosen "to honor the first Bishop of the Episcopal Diocese of North Carolina and the first Rector of Christ Church, the Right Reverend John Stark Ravenscroft." On Sept. 13, 1937, Ravenscroft School opened its doors to 135 students. The staff of the school consisted of 10 people, all women.

Over the next several years, the school expanded by adding both sixth and seventh grades, with eighth grade being added in 1948. Through the years, Ravenscroft prospered at the Tucker Street location. On July 16, 1968, board members Robert P. Holding Jr. and brother Lewis R. ("Snow") Holding offered a substantial challenge grant with the purpose of building a new school. In a News and Observer article, Robert Holding stated his continued dedication "to strive for higher educational standards of instruction in preparation for high school and advanced education, and to emphasize the individual student's talents and abilities so that humanity shall profit by the contribution that each has to make to the total welfare of the community." With that challenge grant, Ravenscroft was poised to enter a new era of its history.

Late in 1968, the Board acquired 115 acres on Falls of the Neuse Road and rechartered Ravenscroft as an independent nonsectarian school the following month. The last graduation at the Tucker Street campus was held on June 4, 1969, and Ravenscroft opened with 300 students at its north Raleigh location in the fall of 1969. Construction of the new campus facilities began literally with a "bang" on March 24, 1970, when dynamite replaced the traditional shovel for the groundbreaking ceremony of the Middle School. That started the construction process, which eventually led to the development of the beautiful campus Ravenscroft enjoys today.

Ravenscroft has a long tradition of educating students and preparing them for college as well as life's challenges. It is with the support and guidance provided by so many leaders within the Ravenscroft community that the school has prospered into one of the finest PreK through twelfth grade independent schools in the southern United States.

Source for the information cited: Ravenscroft School: Story of a Southern School